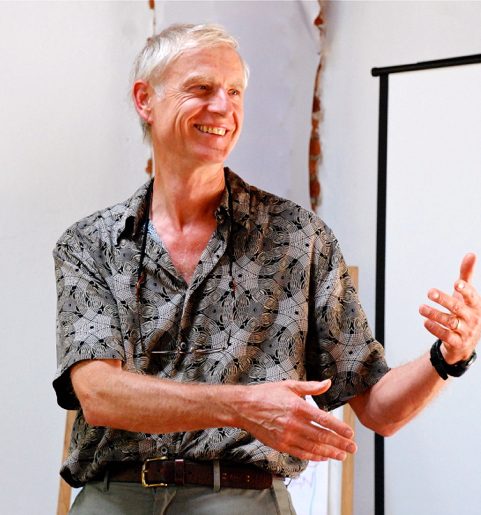 Andrew Langford is the co-president Of Gaia University. Andrew is an unusualist, a possibilist and a lover of small-scale living associated with large-scale thinking. In the early 1970’s, influenced in part by the book Small Is Beautiful: Economics As If People Mattered, he transitioned out of an early career in industry to design and develop an open source, human-scale shoemaking workshop at a time when the mainstream manufacturing industry in England was abandoning the domestic workforce in favor of cheap labor pools on the Pacific Rim.

Andrew and his family supplemented their income through this 10-year period by cultivating an intensive smallholding, growing vegetables, wheat, pigs, chickens, geese and sheep. This smallholding provided essential resources and taught Andrew a profound life-lesson: people with willing hands and access to even modest amounts of fertile land and viable seed can provide for a good portion of their own needs, and this relative self-reliance confers upon them a great deal of freedom.

This experience primed Andrew to be an early adopter of permaculture design thinking when it first spread through Europe in the 1980’s. He soon became the first permaculture design teacher in Britain, and had a successful business  designing at garden and farm scale for private clients, and designing urban retrofits for local governments. He also his applied his qualifications from a Diploma in Management Studies and an M.Sc. in Organizational Analysis and Development to set the Permaculture Association of Britain on a successful course towards establishment. In 1993, Andrew designed and implemented the Diploma in Applied Permaculture system, an action learning worknet for the development of professional permaculture designers that has become a basis for capacity building operations in several northern European countries.

Andrew is a strong advocate for participatory learning and decision-making and is skilled in a variety of facilitation methods, including Future Search and Open Space Technology. He is the author of Designing Productive Meetings and Events, a field manual for UN Agenda 21 facilitators, and a recognized teacher of Re-evaluation Counseling, which promotes the discharge of internal distress and resolution of rigid, patterned thinking as primary routes towards the emergence of healthy, intelligent human cultures.

In Gaia University, Andrew champions action-based learning arising from thoughtful and protracted engagement over more common cerebral academic approaches. He oversees the development of an IT infrastructure based largely on open source platforms and supports the Gaia University community in the activation of complementary currency and project networking systems based on agile, leading-edge designs.

2017 Workshop: International Permaculture CoLab – Advances of the Next Big Step