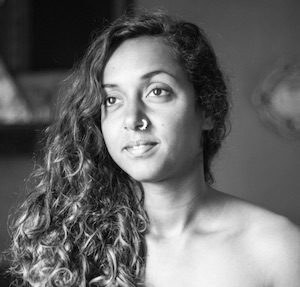 Mallika Nair is an environmental justice activist and the Founder and Director of Growing Together, an Oakland based fruit tree planting and environmental education organization (growingtogetherproject.org). As a first generation American, born in New York City, Mallika grew up at the intersection of cultures and between urban and natural wild spaces, and has made it her life work to heal that divide and bring people closer to the heart of the living world. Effie Rawlings’ interest in education, Agroecology, and community organizing was catalyzed by her family’s experiences farming seed, her time serving as Cryptologic Linguist in the US Army, and her introduction to processes of decolonization at Sisonke School, South Africa. Her interests found a nexus at the Gill Tract Farm, where she helped win the 20-year struggle to protect the land from pavement. Today, she farms, organizes, and teaches at the Gill Tract, recently joining some of its youngest farmers at the learner-led Five Creeks Studios. She also organizes internationally with the friends of the Landless Workers Movement of Brazil. Brooke Porter is a local Bay Area educator and artist who has taught a wide range of subjects from permaculture and gardening to Spanish and visual art. She has worked in Latin America on issues regarding women’s role in preserving traditional forms of agroecological farming and speaks both Spanish and Portuguese. During this pivotal moment in which our planet is faced with rapid climate change, ecological degradation, and social unrest she seeks to help create regenerative food systems. She is also an award winning photographer whose images span from birth photography to social documentary work.