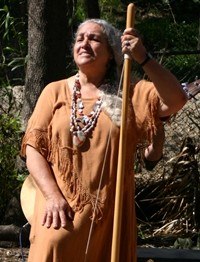 ChoQosh Auh’Ho’Oh was named by the Seneca and Chumash elders. She is herself an elder of Coastal Native Indian descent. She is a giver of spiritual tools, divine and practical, and a messenger of ancient prophecies and sacred stories. ChoQosh Auh’Ho’Oh has received wisdom teachings from the Hopi, Chumash, San Carlos Apache, Seneca, Karok, Cherokee, Haida and Hawaiian. In 1979, she was appointed and served as a Spiritual Ambassador for the Chumash, representing Pacific Coastal Tribes and was sent to speak in Japan, India, Iraq and England. ChoQosh taught for the Cross Cultural Communications program at University of California Berkeley for 19 years, and classes in the great teepee at Cabrillo College in Santa Cruz, California.

Having lived in the Canadian wilderness for many years, she passes on the knowledge of how to harvest the wild for food and medicine. She is the teacher of the moving prayer “The Dance of Life”. ChoQosh was host for KAZU-FM’s award winning radio program Songs For The Earth/ Mending The Sacred Hoop (1985-1990). In 1990, at the invitation of the Maori King Hukapa Mateau of Aotearoa/ New Zealand she was asked to come to share her knowledge and sacred stories. It was there she received the name “Te Wahini O Nga Ho O E Wah- Woman Of The Four Directions Who Call The People To Action”. Sky Eagle, the Chumash elder, caller her one of the great teachers of these times.

ChoQosh teaches a primary course in Wisdom of the Elders. Her words have been published in many books, including Ceremonial Circle, The Feminine Face of God and the magazine Women of Power. ChoQosh will bring to us the Blanket of Hope*, its knowledge, comfort and challenge. In 2006, ChoQosh was an honored Elder at the annual Grandmother Council in Ashland Oregon as well as the Earthdance Festival in Laytonville California where she appeared with Elders from around the world including Agnes Baker Pilgrim and Arun Ghandi.