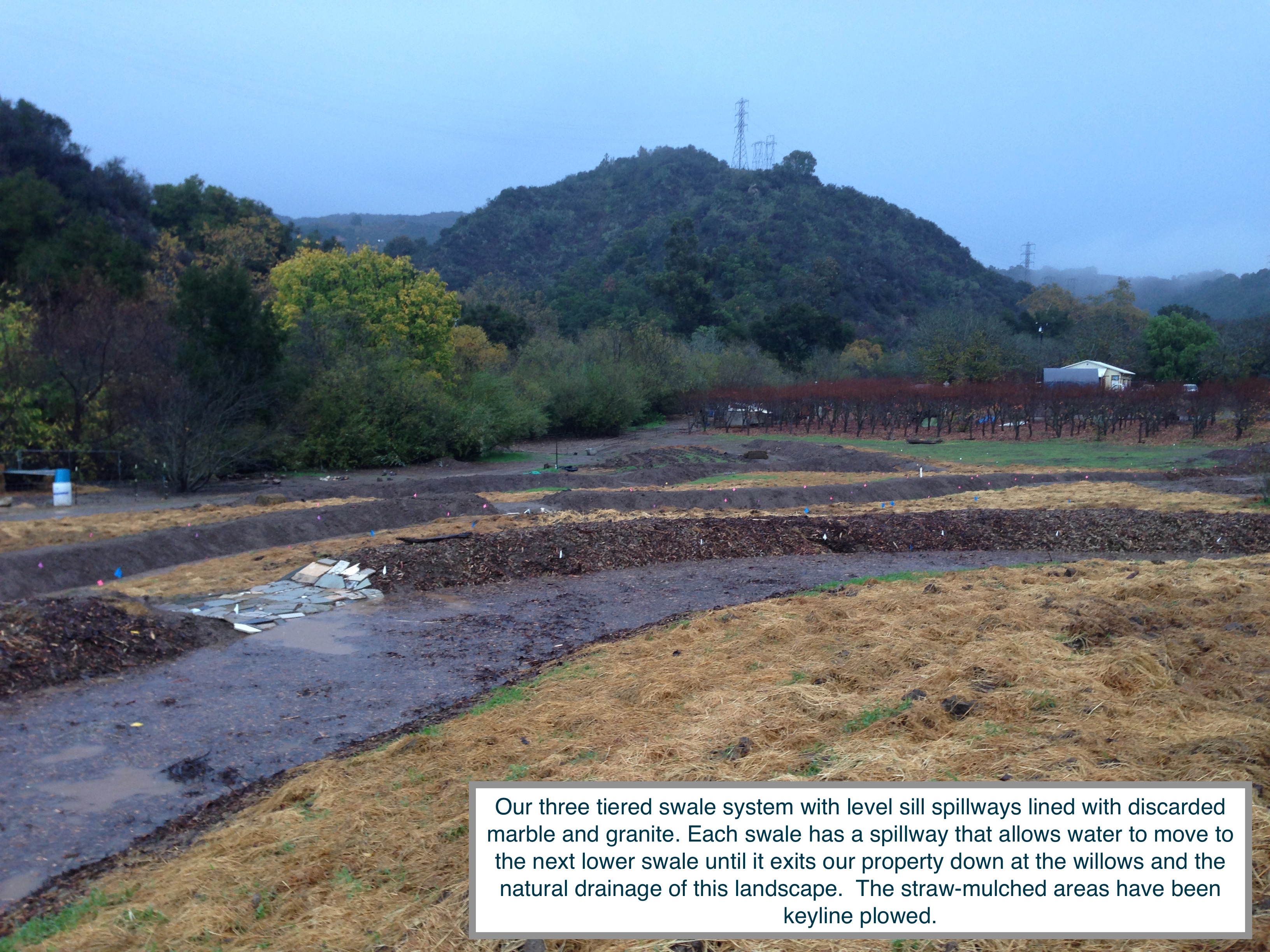 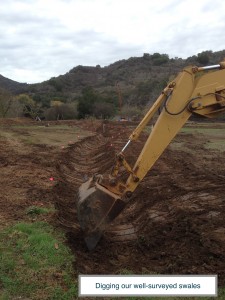 I woke up this morning, put on my gum-boots and went out for a walk around our family farm in the rain. This in itself might not seem to be anything special to many folks, yet this was a 2”/5cm rainfall after several intense years of drought here in Southern California.

I cannot express how exciting this morning has been for me as I was thinking of our entire thirsty state getting an average 2-6 inches/5-15cm of rain during the past 48 hours. I was also exuberant this morning as today marked our fifth-day after completing an epic and highly successful “Earthworks for Resiliency” course for an area of our farm that was transformed into using earth structures to harvest water for our market garden area.

During the course we installed three large swales (one of them integrated with 150 feet of hugelkultur growing bed), a Zuni Bowl diversion structure, some key drains with associated stone and urbanite “armor,” some one-rock dams/gabions, and we used a keyline plow in the interstitial spaces between the swales for our main crop gardens. We then mulched and cover-cropped all of the sites disturbed by our excavator, tractors, and shovels. It was amazing to see how much was learned and accomplished by the 18 students who participated.

This first rain nearly filled the top two swales with water that would have formerly passed quickly off our property, carrying a significant amount of our top soil and hence our land’s fertility bank account. With some simple volume calculations, I estimate we slowed, spread and sank over 41,000 gallons into the landscape in the past few hours all of which will soon grow food for our family and community. With our mulching and cover crops, we will lose very little of this harvested water to evaporation and much of it will infiltrate into our microbe rich soils. Eventually, the water that is not taken up for use by plants in the market garden, will infiltrate its way down into the aquifer to help recharge the groundwater.

After playing in the mud and water with the exuberance of my one-year old Granddaughter, I went up to my wife’s parent’s house to see
how they had fared in the rains. My Mother-in-law was watching the news which was hyping their viewers by showing scene after scene of devastation from flooding that occurred all around California during the night. It was all “bad” news as there was not a single news story about the abundance of water and how it was reticulated into the landscape to stave off future droughts.

Just a few short weeks ago the same news organizations were sensationalizing the effects of the drought. Why is it that the state did not use its resources to set up water harvesting for the times we would get water? What the news was saying was that the “flood waters” existed because of our lack of foresight. This type of accepted lunacy reminds me of some words of Joel Salatin from Polyface farms. He says, “What’s wrong with the picture here folks?” We need to be smarter than this if we are truly going to navigate the extremes presented to us by climate “wierding” and the natural long-term drought cycles.

In digging deeper and doing some rough water harvesting calculations, I found that our state has 163,696 square miles of varied catchment surface area. Each square mile would average 17.38 million gallons of water received for every inch/2.5cm of rainfall or approximately 52 acre feet of water. This works out to be about 8,512,192 acre feet of water over the entire surface of California.

California’s agriculture covers about 67,187 square miles of land. This works out to 3,494,000 acre feet of water that hits the surface for every 1” of rainfall. On average, our state’s agriculture alone uses 34 million acre feet of water a year and most of it is diverted using non-sustainable methods that carelessly wastes 20% of our state’s energy budget. From a cost perspective, the average cost per acre foot for water in California is $70 an acre foot. This translates into an annual cost of over 2 billion dollars for agricultural water not to mention the high cost of ecological damage that is caused through poor diversion practices coupled with extractive agriculture processes.

If all of California’s agriculture landscape was drought-prepared like our small farm and many other permaculture designed farms as well as used holistic management grazing processes, it would only take an average of 9.7 inches/24cm of rain to meet most of our water needs for agriculture in our state with little irrigation delivery infrastructure or storage costs. This is because the most efficient place to store water is in the soils when we have agricultural practices that builds soil.

Imagine if the news broadcast this morning had a different message like: “Today with an intense 2” rainfall event, the state of California harvested over 17 million acre feet of water for our future food, fuel and fodder. Even with this heavy rainfall, the people of the state had created a sponge and no flood related damage was reported. Once again the citizens of this sunny state are saving money, building an ecology worth inheriting and quenching the thirst of future generations…” Now this is news worth hearing…

We have the knowledge to be able to mitigate much of the effects of long-term drought if we have the wisdom to put our minds, hearts, shovels, and excavators to work. With less than one year’s of our state’s current agriculture budget, if the political will could be mustered, I believe we could convert this entire drought-prone state into a living water sponge. I believe we must do this as our legacy to the future generations. Now let’s get to work….

Green Your Grow
with Max Meyers