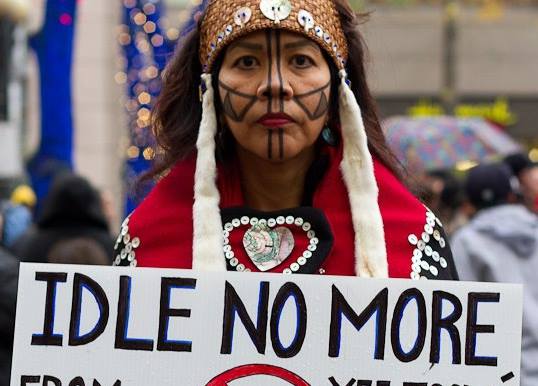 Sweetwater Nannauck, founder of Idle No More Washington, is an activist who advocates for the protection of the fragile environment of the Northwest Coast, for tribal sovereignty rights, and for the traditional ways of life of Native people. She conducts ‘Decolonizing Our Activism’ workshops in a respectful way that is both healing and empowering.

Since January 2013, Sweetwater has led Idle No More Washington in over 80 events and nonviolent direct actions that address local and global issues. She went to Washington, DC to lobby to protect the Arctic; she was involved in the ‘Shell No’ actions in Seattle and Anchorage when President Obama was there. She helped organize the ‘Paddle to Standing Rock’ in September 2016 and was featured in the annual Seattle Weekly ‘Best of Seattle’ (2015) ‘Best Activism Idea’.