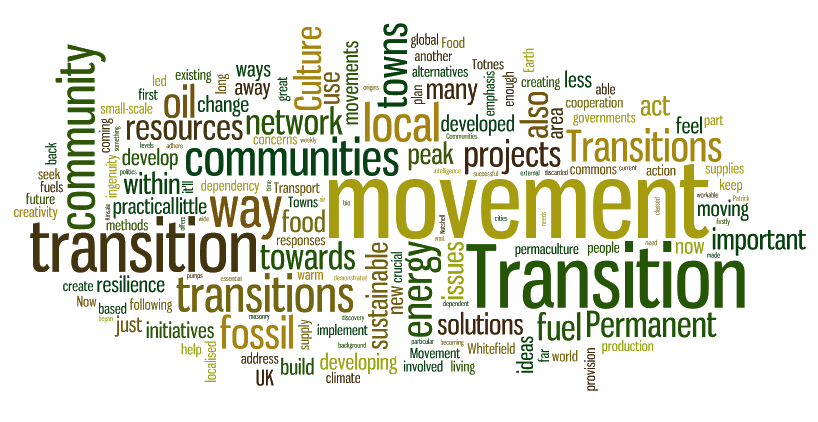 The Transition Movement, an international network of communities committed to moving away from fossil fuel dependence toward local resilience, just celebrated its 10th anniversary and is now in 50 countries. Join Transition leaders from Northern California to learn how the movement is growing and spreading locally, nationally, and around the world. Hear about successful projects and organizing strategies, challenges, and opportunities to get involved.

An intro & overview of Transition for folks who are new to it or want to know what is happening on the international, national, & regional levels. Presenters will include Transition US staff & leaders from Transition Initiatives in Northern California. This will include stories/presentation and hands-on activities. It will help grow our movement by giving folks a flavor of the broader context of the global Transition movement, which is very inspiring and empowering. Carolyne & Marissa will be fresh off the international Transition conference in the UK with inspiring stories of Transition projects around the world. We’ll also share opportunities for people to plug into local Transition activities, connect with Transition resources, or start their own Transition initiative.

Learn More About the Transition Panelists:

Ayako Nagano is an attorney, entrepreneur and a community organizer. Ayako is a frequent volunteer at Transition Berkeley and the Northern California Resilience Network. She presently serves on the Board of ZenPlay, a charitable organization that crowd-sources funds to help under-served children both locally and globally. Ayako has utilized her non-profit and legal experience to support diverse causes including the Japanese-speaking persons living in the United States; tenant rights in Oakland; the HIV Law Project in New York City; the Union of Needletrade, Industrial, and Textile Employees; women’s rights, and human rights.

Marissa Mommaerts is Director of Programs for Transition US, the national hub of the international Transition Movement, and is involved with the Northern California Community Resilience Network, Transition Sebastopol, and the Sebastopol Village Building Convergence. Marissa is a passionate homesteader, community organizer, and activist.

William Mutch has been involved with Permaculture for most of his life, formally and informally, and has been teaching it for around ten years.  A reskiller, he is also a cofounder of Transition Palo Alto and Transition Silicon Valley, and writes for and hosts Transition Cafés in the South Bay, spaces in which to have conversations that matter.

Bonnie Borucki has been a Berkeley resident for 24 years, and is active in many local groups & activities including Transition Berkeley, Ashby Community Garden, Berkeley Climate Action Coalition, We Bee Gardeners, and the East Bay Permaculture Guild. Bonnie is interested in growing food, supporting pollinator health, sustainable land use, permaculture design, art and design, and helping maintain a healthy and just community.

Nils Palsson is Communications and Special Projects Coordinator for Transition US, and has worked since 2010 on building local resilience as a community organizer with Transition Lake County. Nils serves as the host and producer of the weekly community and internet radio program Wake Up & Thrive!, and he is founder and facilitator of the annual Hands Around Clear Lake healing ceremony and tribal gathering. Nils is also working on a 2016 run for US Congress! He lives on Cobb Mountain with his daughter, Satya Rose.

Larry Goldberg has lived on the California Northcoast for 35 years.  He works for Humboldt Plan It Green, a non-profit environmental group focusing on building sustainable green communities and re-localizing economies.  Larry is an energy expert (building performance analyst & renewable energy) and has been working on programs to build “resilient” communities through the “Transition Town” movement.  He is active in promoting and developing Transition Initiatives across Northern California.

Discovering the Living Earth: Learning to Live in the Spiritual Dimension of the Planet

Jobs vs. Environment: A False Choice