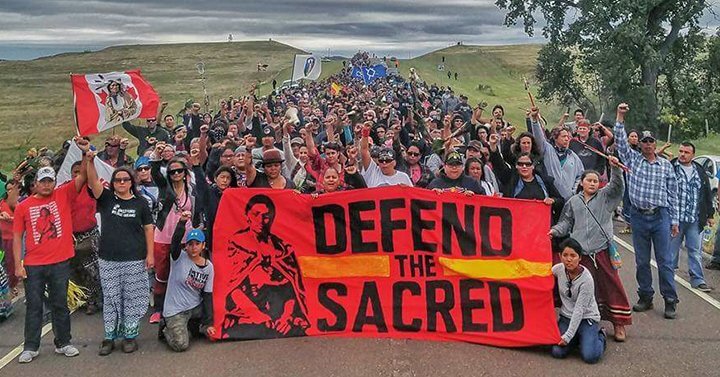 Speaking to lessons learned from her time at Standing Rock, indigenous grandmother Winona LaDuke reminds us, “I do not enjoy my time fighting bad guys, or as [John] Trudell would say ‘keeping the beast out of the garden”’, but someone has to keep the beast out of the garden, so someone can garden, and more of us need to keep the beast out of the garden, so that more people can garden.”
With this wisdom in mind, this panel of Indigenous activists, community leaders along with a white ally will dialog around what it means to defend the sacred in a time of socio-ecological crisis. To continue the above metaphor, how can those gardening come to the aid of those keeping the beast out of the garden? How can those tending the wild better support the water protectors and land defenders on the frontlines?  What is the role of permaculture in defending the sacred?  And, most importantly, how can we all stand more humbly in solidarity with Indigenous peoples of these lands who have been tending her sacredness for generations?
Speakers:
Shelly Covert is the Spokesperson for the Nevada City Rancheria Nisenan Tribe. She sits on the Tribal Council and is community outreach liaison. She is also the Executive Director of the non-profit, C.H.I.R.P.  (the California Heritage: Indigenous Research Project), whose mission is to preserve, protect and perpetuate Nisenan Culture.   Shelly is a singer/song writer and tradition keeper within her Tribal group.
The Nevada City Rancheria Nisenan Tribal homelands lay within the Bear and Yuba River watersheds and are the indigenous people who were here before the Gold Rush, survived, and remain in their ancestral homelands today. But, as a “terminated” Tribe, the Nisenan lost their last piece of land when their reservation was sold at auction in 1965.  It has been a long-time-coming, but settling communities are finally seeing the value in ancient, Native landpractices and a new era of collaboration with Tribes has begun. The conversation is wrought with uncertainty but is a huge milestone for reclaiming the sacred and protecting the environment.

Cheryl Angel is a Sicangu Lakota spiritual activist dedicated to non-violent direct action and environmental justice.  Years of activism led Cheryl to Standing Rock in 2016, where she became a community member of Sacred Stone Camp. She led prayer and ceremonies during the almost year-long occupation to stop the Dakota Access pipeline from infringing on Native rights, and destroying both fragile cultural treasures and clean water.  Now she travels the world to share the message of decolonizing Unci Mahka, or Grandmother Earth and protecting her watersheds.

Desirae Harp is an advocate for water rights and indigenous land stuardship. She is a community organizer, singer/songerwriter, and educator. She is a member of the Mishewal Wappo (Ona*tsatis) nation from the central coast of California. She is the founder of the Mishewal Ona*tsaTis language revitalization program. She is the coordinator of the run4salmon campaign to restore the California water ways, salmon runs, and indigenous ways of life. She works for Indian People Organizing for Change to oppose the development of sacred sites and to advocate for California indigenous peoples to be at the forefront of discussions on climate change within the bay area.

Michael Wellman is a doctoral student in the Ecology, Spirituality, and Religion program at the California Institute of Integral Studies. Revolving at the intersection of resistance, reskilling, and rewilding, his research encompasses the cultures of radical land defense, tending the wild, and traditional healing, where he is interested in what it means to embody the ecowarrior spirit in these times of the Great Turning. He currently resides on traditional mountain Maidu lands in the South Yuba watershed.

Susan Juniper Park is grateful to be living on beautiful Chochenyo Ohlone ancestral lands (aka Oakland, CA).  Originally from the Gyeongsang-Do providence of South Korea (where folks are known to be extra spicy) and long rooted in the East Bay, she is a radical activist who works at the intersection of social and ecological justice, practices anti-colonial solidarity, and facilitates group dialog.  She is also a garden-based ecological educator for Elementary School students and devoted to rekindling ancestral Earth skills.  Perhaps most dear to her heart, following a 20-year trajectory in healing and spiritual work, she is currently cultivating a justice-based, psycho-spiritual healing practice that honors the connection between individual struggles with systemic oppression, intergenerational trauma and displacement from ancestral lands.She is also a community organizer with the NorCal Resilience Network, an organization that is strengthening the connections between grassroots groups focused on community-based ecological solutions.  NorCal Resilience Network is a partner organization to the 2018 Permaculture Convergence.

After the Fires: The power of community in disaster response, recovery and rebuilding