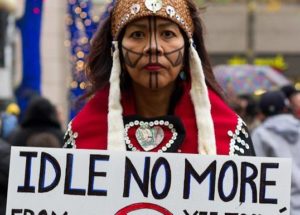 Sweetwater Nannauck (Tlingit, Haida, Tsimshian)
Sweetwater’s (Tlingit) great-grandmother was a traditional medicine woman. Sweetwater was called to be a healer in December 1997, during which time she was bed-ridden with four slipped discs in her lower back. She has twenty-one years of extensive training and experience in traditional Native healing. She was taught how to do healing work from her ancestors and ‘Spirit’. From them she inherited or learned how to do dream work, energy work, work with herbs, work with the weather, how to spiritually cleanse a person and/or home to facilitate healing, learned how to pray or sing to call ancestors, Spirit, and do spirit healing. She specializes in historical trauma healing, PTSD, and helping others from spiritual attacks. Sweetwater’s approach to healing is holistic in nature incorporating the mental, emotional, physical and spiritual aspects to help access what the patient needs to facilitate their healing process.
Sweetwater learned about and participated in traditional sweat lodges with Gilbert Walking Bull (Lakota) and from Clifford Allen (Nez Perce) she learned how ‘the Creator, created creators’ which basically means we as human beings have an active role in creating our reality. She has been to almost every hospital in the Seattle area over the years praying for people and helping them on their healing path. She has served as a traditional consultant to other mental health providers in Seattle and outlying areas that serve Native American populations. She assists in providing Native healing in conjunction with conventional western psychiatric medical treatment.
Publications:
Tsosie U, Nannauck S, Buchwald D, et al. Staying connected: a feasibility study linking American Indian and Alaska Native trauma survivors to their tribal communities. Psychiatry 2011 Winter; 74(4):349–61.
http://guilfordjournals.com/doi/abs/10.1521/psyc.2011.74.4.349
Deborah Bassett, Ursula Tsosie, Sweetwater Nannauck. “Our Culture is Medicine”: Perspectives of Native Healers on Posttrauma Recovery Among American Indian and Alaska Native Patients. The Permanente Journal Winter 2012 – Volume 16 Number 1
http://www.thepermanentejournal.org/issues/2012/winter/4253-pts.html