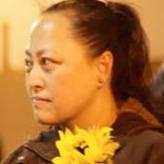 Susan Juniper Park is an Oakland-based activist and organizer engaged at the cross roads of ecological, economic and social justice efforts. She is also deeply engaged in healing work, urban farming and permaculture. She envisions a world of deep systemic change that will move us all towards living in balanced interconnection with the Earth and each other–a world that is based in justice, deep culture and bioregional resiliency. She has previously ran a grassroots economic development project for a food justice organization, managed a farmers’ market, worked at a worker-owned cooperative, did fundraising for a grassroots non-profit and was part of a long-standing land defense direct action project. Currently she is involved with Oakland’s Economic Development Without Displacement Coalition, and is a core organizing member for Living the NEXT Economy Convergence happening in October in Oakland. She immigrated from Korea as a child where she experienced living in extended family, using only an outhouse and no existence of grocery stores.